According to media reports, Chinese President Xi Jinping’s recent visit to Xinjiang signals a new emphasis on the assimilation of the Uyghurs, a predominantly Muslim ethnic minority group that the US and other governments say is the victim of ongoing genocide. END_OF_DOCUMENT_TOKEN_TO_BE_REPLACED

On China Insider, a look at the thousands of photos of Uyghur detainees—the youngest just 15 years old to as old as 73—from the Xinjiang police files, which also contain images of police drills and internal documents—and a shoot-to-kill order for anyone who attempts to escape. We speak with the Victims of Communism Memorial Foundation President Andrew Bremberg about his organization obtaining these shocking documents and photos. I also speak with the prime minister of the East Turkistan Government in Exile, Salih Hudayar, about his reactions to the photos.

Germany on Tuesday called for a transparent investigation into “shocking” allegations of rights abuses targeting the Uyghur minority in Xinjiang, China, after a media consortium published leaked documents it said catalogued the violations. END_OF_DOCUMENT_TOKEN_TO_BE_REPLACED

The United States on March 21 announced the imposing of visa restrictions on Chinese officials responsible for “repressive acts” against ethnic and religious minorities inside China and abroad, including the United States. END_OF_DOCUMENT_TOKEN_TO_BE_REPLACED 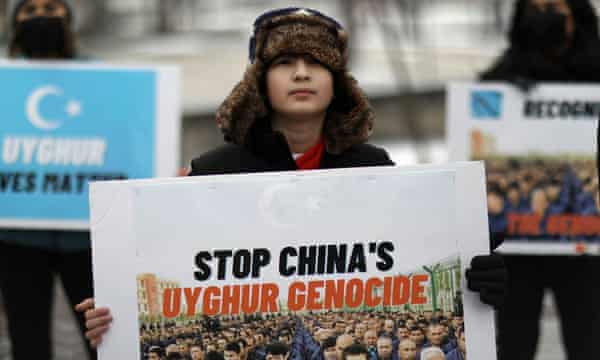 Uyghurs are forced to work collectively in villages so that they can be monitored by the government all time.

“The situation is much, much worse than what is being reported. The Uyghur people have disappeared. Death is everywhere right now.”

These are the words of Dr Erkin Sidick, a Uyghur American who is the President of the Uyghur Projects Foundation and senior advisor to the World Uyghur Congress.

He claims that the total number of Uyghur detainees in camps in China and those presumed dead now exceeds the total number of Jews detained and killed during the Holocaust – an allegation that dwarfs previous reports on China’s ‘demographic genocide’ in Xinjiang, or what was once East Turkestan.

Japanese clothing and lifestyle brand Muji says it has stopped exporting cotton sourced in Xinjiang to the United States, but rights groups say the company has done little to remove Xinjiang cotton — which has been linked forced labor by mostly ethnic Uyghur detainees who have committed no crime — from its supply chain.

The company said in comments e-mailed to RFA that since the outgoing Trump administration had banned imports of cotton and tomato products from Xinjiang last month, it had stopped exporting items made with Xinjiang cotton there “to comply with U.S. laws and regulations.”

The ban, which came after reports emerged that the mass incarceration camps in Xinjiang were increasingly linked to lucrative production processes using forced labor….