China is using a whole-of-society approach to steal its way to become a military power, and the U.S. government needs to better defend against such an espionage campaign, said a retired CIA officer. END_OF_DOCUMENT_TOKEN_TO_BE_REPLACED 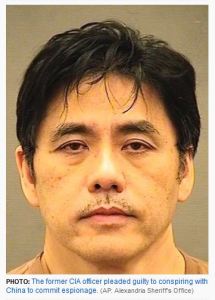 A former Central Intelligence Agency officer who was paid hundreds of thousands to leak United States defence and intelligence secrets, has pleaded guilty to spying for China, the US Justice Department said.

Jerry Chun Shing Lee was approached in 2010 by two Chinese intelligence officers who offered to pay him $US100,000 ($143,800) and to take care of him “for life” for information he had acquired as a CIA officer, according to a US Justice Department statement.

Hundreds of thousands of dollars were subsequently paid into Lee’s personal bank account between 2010 and 2013, according to the statement.

The statement also said that Lee created thumb drives containing secret information about CIA activities and the location and time frame of a sensitive operation.

The fear of Chinese Government intrusion into Western universities is sparking a push by Australia’s closest allies for a more coordinated response to Beijing’s aggressive tactics.

Having observed attacks on academic freedoms in the United States, the United Kingdom, Canada, Australia and New Zealand — discussions have begun in diplomatic and security circles about whether the Five Eyes intelligence partners should respond collectively to the threat, so there are no “weak links” which can be exploited.