Four Chinese badminton players have been punished for breaking anti-corruption rules by failing to try their best in a doubles match, the sport’s governing body said Friday.

He Ji Ting, Tan Qiang, Li Jun Hui and Liu Yu Chen have been hit with three-month bans, but the sentences have been suspended for two years, the Badminton World Federation said. END_OF_DOCUMENT_TOKEN_TO_BE_REPLACED

‘My Heart Aches Watching This’

Had it been up to him, Latvia’s luge coach Martins Rubenis would never have made the trip to the Beijing Winter Olympic Games. Indeed, he didn’t know if he would even be allowed into China until the very last moment. END_OF_DOCUMENT_TOKEN_TO_BE_REPLACED

While seemingly unrelated, these two topics are both underscored by the prevailing danger posed by the Chinese Communist Party to U.S. national security.

Why are defected, U.S.-born athletes being presented as the stars of the Beijing 2022 China team?

China’s quest for gold medals at the Beijing Winter Olympic Games has been one filled with drama.

Two out of three gold medals so far have come from short track speed skating. Both wins came about from post-race reviews in favor of China, sparking protest from aggrieved parties, as well as accusations of referee favoritism for the host country. END_OF_DOCUMENT_TOKEN_TO_BE_REPLACED

END_OF_DOCUMENT_TOKEN_TO_BE_REPLACED

Sen. Rick Scott (R-Fla.) condemned Beijing’s “gross” arrests ahead of the 2022 Winter Olympics targeting those who speak against the Chinese regime’s rule, saying such a move “deserves the scorn of every freedom-loving nation.” END_OF_DOCUMENT_TOKEN_TO_BE_REPLACED

The much-anticipated Winter Olympics in Beijing got off to an awkward start as a member of the local security forces wearing a red armband accosted and pushed a Dutch reporter who was attempting to report on the event. END_OF_DOCUMENT_TOKEN_TO_BE_REPLACED

“My stomach hurts, I’m very pale and I have huge black circles around my eyes. I want all this to end. I cry every day,” Russia’s Valeria Vasnetsova said.

China is facing massive criticism from all corners for staging the ongoing Winter Olympics 2022 in Beijing despite surging cases of Covid-19.

NEW YORK—The opening ceremony of the Beijing Winter Olympics contained all the pageantry that one might expect from an authoritarian regime eager to burnish its global image: hundreds of children holding dove-shaped props formed the shape of a heart as they danced on a star-lit stadium, as green and white fireworks spelled out the word “spring” overhead, a reference to the lunar new year celebration. END_OF_DOCUMENT_TOKEN_TO_BE_REPLACED

NTD.com – American athletes and the sports community at large have shied away from taking a public stance on communist China’s human rights atrocities because of the dollars at stake, according to Boston Celtics center Enes Kanter Freedom. END_OF_DOCUMENT_TOKEN_TO_BE_REPLACED

With less than a year until the Winter Olympics in Beijing, calls are mounting from around the globe for countries to boycott the Games over the Chinese Communist Party’s (CCP) ongoing abuse of human rights.

In the United States, Republican lawmakers have called for the Games to be moved out of Beijing, or failing that, a boycott of the event. They point to the Chinese regime’s sweeping campaign of repression against ethnic minorities, religious believers, and dissidents, with particular emphasis on its atrocities against Uyghur Muslims in the autonomous region of Xinjiang that the Trump administration declared a genocide.

Conservative Leader Erin O’Toole is calling on Ottawa to push for the relocation of the 2022 Winter Olympics outside of China due to Beijing’s “genocide against Uyghur Muslims” and “police state in Hong Kong,” violating both human rights and principles of Olympism.

In a press conference on Tuesday, O’Toole said the time has come for Canada to take a stand for human rights and dignity and call on the International Olympic Committee (IOC) to relocate the 2022 Winter Olympics out of China.

“The first principle of the Olympic Charter states that the Olympic movement is intended to ‘create a way of life based on the joy of effort, the educational value of good example, social responsibility and respect for universal fundamental ethical principles,’” said O’Toole, but “genocide is taking place in China right now.”

“Approximately one million Uyghurs have been forcibly relocated into detention centres for re-education in [Xinjiang]. People who have managed to escape have reported horrific coordinated violence using violence, using physical, mental, and sexual torture,” O’Toole said. 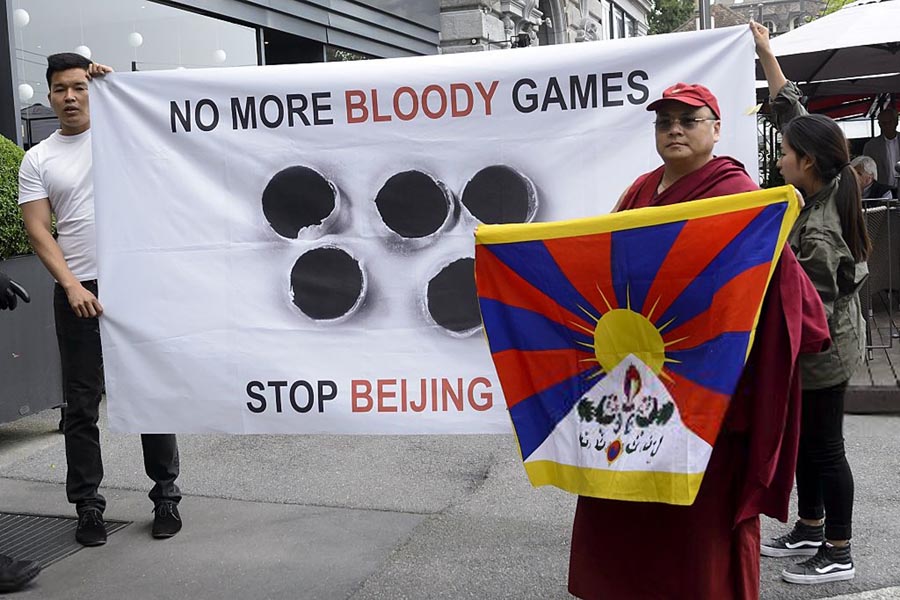 China has shot a clear warning at human rights groups rallying for countries to boycott the 2022 Winter Olympics over human rights complaints.

Editor of China’s propaganda mouthpiece The Global Times Hu Xijin warned that the government would “seriously sanction any country” that makes a statement against the superpower by refusing to send athletes to Beijing.

The Olympics are almost here! No, not the Tokyo 2020 Olympics that were postponed because of the coronavirus. The Beijing 2022 Winter Olympics! But China is committing genocide, and that has a lot of human rights groups calling for a boycott of the Olympics. And China is threatening any country that does.

Even by China’s heavily nationalistic standards, the reaction to a tweet this week has been extreme.

A ‘meet the fans’ night with visiting NBA stars scuttled at short notice, much to the disappointment of fans.

Even a young social media user being forced by his employer to write a public apology letter for a post about a cartoon called the Rocket Squad.

The uproar over a tweet supporting the Hong Kong protestors from Houston Rockets general manager Daryl Morey is the sharpest sign yet that in China’s ‘New Era’ — as President Xi Jinping calls it — foreigners are expected to submit to its censorship rules if they want to do business.

In recent years, grovelling apologies have become the norm.

“We made clear that we were being asked to fire him, by the Chinese government, by the parties we dealt with, government and business,” Silver said in his first US interview about the league’s ongoing free speech scandal. “We said there’s no chance that’s happening. There’s no chance we’ll even discipline him.”

Speaking at the TIME 100 Health Summit, Silver noted that “The losses have already been substantial,” adding “Our games are not back on the air in China as we speak, and we’ll see what happens next.”

Prime Minister Manasseh Sogavare says China will step in to fund a $AUD74 million stadium for the 2023 Pacific Games, in place of Taiwan.

He announced the funding on his return from China, a month after Solomon Islands ended diplomatic ties with Taiwan.

Prime Minister Sogavare said the financing would be in the form of a grant.

“It’s the implementation of commitments of the understandings that we’ve signed with them,” Mr Sogavare said, in reference to five Memorandums of Understanding that he signed during his trip to China last week.

The Pacific Games is the largest sporting event in the region, with Solomon Islands to host it for the first time in 2023.

Everyone will be watching the man Horton beat at the Olympics — defending world champion Sun Yang from China, a man widely considered the greatest freestyle swimmer of all time.

In the West, much has been written about Sun and the hammer that was used to smash a vial of his blood, preventing drug testers taking it for analysis last September.

Sun and Horton’s war of words:

More than 250 runners have been caught cheating during the Shenzhen Half-Marathon in China, with organisers handing out hundreds of bans after last weekend’s race.

The majority of the bans were for runners taking shortcuts — 237 people were caught on traffic cameras cutting through bushes — while several other runners were found to be wearing fake bibs.

Organisers said those who took the shortcut would have run up to three kilometres less than the full 21.1km distance.

“We deeply regret the violations that occurred during the event,” Chinese news outlet Xinhua quoted organisers as saying.

“Marathon running is not simply exercise, it is a metaphor for life, and every runner is responsible for him or herself.”