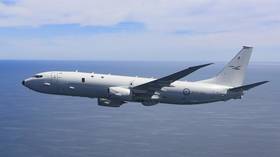 The Australian Department of Defence accused China of firing a laser at one of its spy planes this week, condemning it as a “serious safety incident” that had the potential to “endanger lives.”

In a Saturday statement, the Australian military claimed one of its P-8A Poseidon spy planes “detected a laser illuminating the aircraft while in flight over Australia’s northern approaches.”

“The laser was detected as emanating from a People’s Liberation Army – Navy (PLA-N) vessel,” the statement alleged, calling the “illumination of the aircraft by the Chinese vessel” a “serious safety incident.”

The Chinese vessel was allegedly sailing east through the Arafura Sea, between Papua New Guinea and Australia, at the time of the incident.