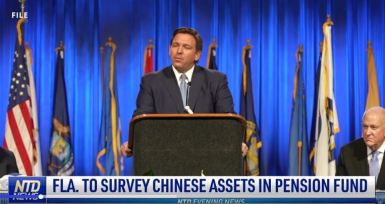 Florida officials on Monday took action to disentangle state retirement funds from the Chinese Communist Party (CCP), including revoking authority that let outside managers decide where to invest some of the state’s pension funds.

The plan from Gov. Ron DeSantis, a Republican, was approved during a meeting of the State Board of Administration of Florida, which invests and manages the state’s pension plan, one of the largest public retirement plans in the U.S., and smaller funds.

The board also approved launching a review to see how many of the state’s assets are tied up in Chinese companies and clarifying all fund managers should act solely in the financial interest of the state’s funds.

Over 5,000 proxy votes for investments have been cast since 2016, according to state data.