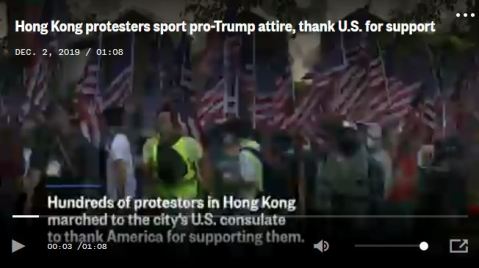 BEIJING — China said on Monday that it would suspend U.S. Navy visits to Hong Kong and sanction a range of pro-democracy non-governmental organizations in retaliation for the passage of legislation supporting human rights in Hong Kong by Congress last week.

Foreign Ministry spokeswoman Hua Chunying repeated accusations that the Hong Kong Human Rights and Democracy Act “seriously interfered” in Hong Kong’s internal affairs and appeared to back up China’s threats the U.S. would bear the cost of the decision.

Along with suspending visits by official U.S. military ships and aircraft, Hua said China would sanction organizations including the National Endowment for Democracy, the National Democratic Institute for International Affairs, Human Rights Watch and others that she said had “performed badly” in the Hong Kong unrest.