Chinese authorities have reportedly detained more than 100 members of an unregistered Christian church and their high-profile pastor, as the Communist Party’s country-wide crackdown on organised religion continues.

Police raided the homes of members of the Early Rain Covenant Church in the city of Chengdu on Sunday evening, including the home of its outspoken leader, Protestant pastor Wang Yi. 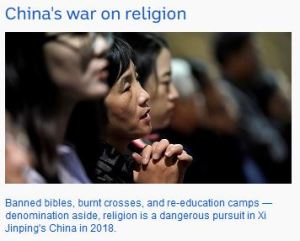 The church said on its Facebook page more church members were detained following further raids on Monday and Tuesday morning, and accused police of physically assaulting some worshippers and stomping on their feet.

Mr Wang and his wife remain in custody, although a couple of other senior church leaders have been released but are still being monitored in their homes.