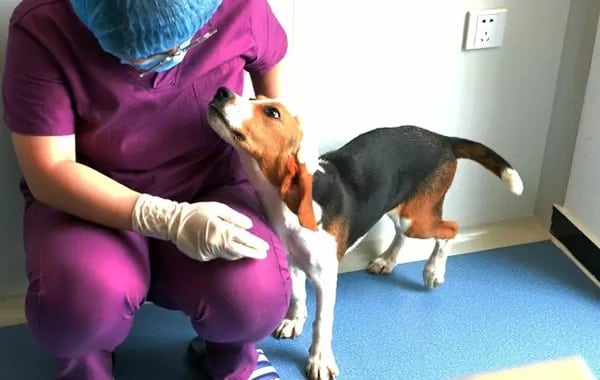 Technocrats in China are pushing forward with gene editing and cloning, ostensibly for medical research, but the ethical issues are piling up at breakneck speed. Human trials are clearly in view in China. Technocrats ‘invent’ because they must, not because there is a good need to do so. ⁃ TN Editor

With his black, brown and white fur, Longlong looks like most beagles. But the puppy has been sick with a blood-clotting disorder since birth — exactly what scientists in China had wanted.

The pup was cloned from Apple, a different dog whose genome was edited to develop the disease atherosclerosis.

With that genetic information now coded in, the disease — a leading cause of stroke and heart sickness — was passed along to Longlong, who scientists will use to study the condition and its possible cures.

South Korean scientists cloned the first dog, an Afghan hound named Snuppy, in 2005.
“A cloned dog born from a gene-edited cell donor is certainly a breakthrough,” says Eugene Redmond, director of Neural Transplantation and Repair at the Yale University School of Medicine, who was not involved in the research.

“Dogs share the most inheritable diseases with human beings, which makes them the best disease models to study,” says Feng Chong, technical director at Sinogene.

According to Feng, Longlong’s birth was the first time scientists had combined two cutting-edge bio-technologies: A gene-editing tool called CRISPR with somatic cell cloning technology – the method used to clone Dolly the sheep.

Atherosclerosis, in which fatty material builds up and thickens artery walls, can cause heart attacks and strokes, and affects more than 15.8 million Americans alone. Cardiovascular diseases are the number one cause of death globally, killing 17.7 million people in 2015, according to the WHO.

To date, researchers say the dogs haven’t shown any symptoms of the disorder but they are closely monitoring their health, said Mi Jidong, General Manager of Sinogene. Drugs to treat cardiovascular diseases are already being tested on the healthy animals, he added.